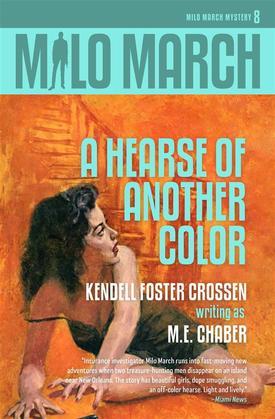 Three businessmen go to New Orleans to skin-dive off an island where their map indicated there was ancient pirate treasure. They are accompanied by a haughty Creole guide and an African-American diviner whose chatter about spirits and spells is worthy of an Oscar. When two of the treasure seekers go off by themselves and never come back, the third man wants to cash in on the life insurance policies the three men took out, each one payable to the other two survivors.

Never eager to pay up too hastily, the insurance company sends Milo March to New Orleans to find out what really happened to the two missing men. It is claimed they were accidentally sucked down into quicksand and buried in it forever?a horrible fate. But what if that’s not what happened? Had the survivor killed the two men and disposed of their bodies, either to collect the insurance or get possession of the treasure they found? Had the three men entered into a conspiracy in which two would disappear and the third would collect for all of them? Or could they have stumbled onto some illegal operation on the island, leading to their kidnapping or murder?

Milo is tailed by criminals and G-men, threatened by a nasty little gangster, and wooed by a cultivated Syndicate boss who swears that he abhors violence, and he almost drowns when his tank runs out of oxygen during a skin-diving expedition. An accident? Milo is so busy that he almost gets behind on his drinking, though not on his dates with a gorgeous blonde who takes him sightseeing, and more. It will require a lot of action, smarts, and patience before Milo March discovers that the key to the mystery is hiding in plain sight.