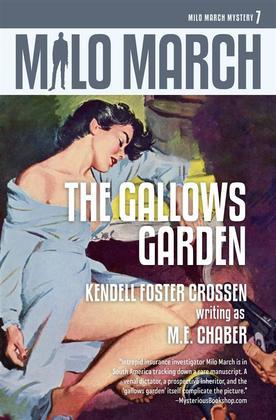 When Milo March heads for an island in the sun to recover the stolen copy of a heavily insured manuscript, it’s like a one-way ticket to hell: his destination is a brutal Caribbean dictatorship called the “Monican Republic.” The manuscript, a scandalous exposé of the government, is in the hands of the dictator himself, who seized it before it could be published. The author is a Monican professor who has been kidnapped on American soil and forced back to his homeland to face the wrath of the dictator. And two other men—one a U.S. citizen—have died under suspicious circumstances in connection with the kidnapping.

Milo’s assignment is just to get the valuable manuscript back for the insurance company. But he also wants to investigate whether the deaths of two men were murders engineered by the regime. He also wonders what had happened to the large sum that the professor withdrew from a charitable fund for Monican refugees the same day he vanished. It would be great to deliver the regime’s chief assassin into the hands of the New York police. Not to mention that Milo has to figure out how to smuggle the manuscript out of the presidential palace. Oh, and what happened to the professor?

There was no problem getting into the Monican Republic; it’s getting out with all of this that might cause some trouble for Milo. And then there’s the small difficulty of two Latina beauties who may have been set up to trap him…

From the moment Milo lands in Torcido’s island, he is marked for murder. The finger man is an international playboy, and the executioner is a sinister mystery man called El Nariz—“The Nose.” The bait is a dark-haired Latin beauty with her own brand of Caribbean allure. It could be a lovely way to die… if only the sadistic Monican police chief doesn’t finish Milo off before he can fully enjoy the perks of the job.