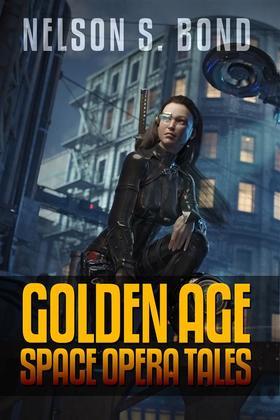 Nelson Slade Bond (November 23, 1908 – November 4, 2006) was an American author who wrote extensively for books, magazines, radio, television and the stage.

The 1998 recipient of the Nebula Author Emeritus award for lifetime achievement, Bond was a pioneer in early science fiction and fantasy. His published fiction is mainly short stories, most of which appeared in pulp magazines in the 1930s and 1940s. Many were published in Blue Book magazine. He is noted for his "Lancelot Biggs" series of stories and for his "Meg the Priestess" tales, which introduced one of the first powerful female characters in science fiction.

He started by writing sports stories but made his first significant sale with "Mr. Mergenthwerker's Lobblies", which was published in Scribner's Magazine in 1937. His first science fiction story was "Down the Dimensions" in the April 1937 issue of Astounding. He only wrote occasional non-fiction once he was established as an author of fiction.

Lighter Than You Think

The Ballad of Blaster Bill

The Ballad of Venus Nell

Phantom Out of Time