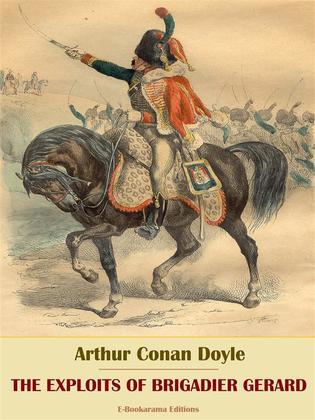 The Exploits of Brigadier Gerard

Having killed off Sherlock Holmes, Sir Arthur Conan Doyle began a new series of tales on a very different theme.

"The Exploits of Brigadier Gerard" is a volume collecting 8 short stories first published in 1896 by George Newnes Ltd. Other Brigadier Etienne Gerard's stories were collected in "Adventures of Gerard" in September 1903.

Brigadier Gerard is an officer in Napoleon's army—recklessly brave, engagingly openhearted, and unshakable, if not a little absurd, in his devotion to the enigmatic Emperor. The book a mix of historical and humoristic stories where the brigadier is conceited, pretending to be the best soldier and seducer of his country.

The Brigadier's wonderful comic adventures, long established in the affections of Conan Doyle's admirers as second only to those of the incomparable Holmes, are sure to find new devotees among the ardent fans of such writers as Patrick O'Brian and George MacDonald Fraser.