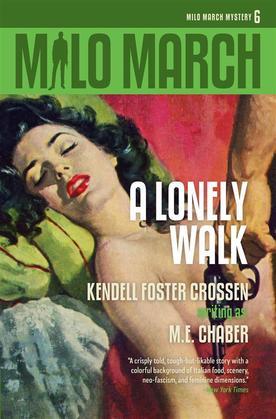 Milo March, Madison Avenue insurance detective, is sent to Rome to investigate the double-indemnity claim on the policy of a young woman who may have been murdered. Anna Maria went walking on a beach, allegedly to bathe in the healing seawater. A few hours later she was found lying nude on the sand, with no apparent signs of violence to the body. An accidental drowning, says the medical report, and the family puts in a claim for the large benefit. The insurance company, understandably, would like to confirm that the death was indeed an accident.

Although the case is quickly closed by the police, the whispers of Rome will not be silenced. They insist that the girl was murdered, that she’d been consorting with VIPs at a wild drug party, that she was pregnant and the guilty man did not want any trouble. It is rumored that politicians made the police hush up the truth, lest a scandal topple the Christian-Democrat government, allowing the Communists to take over.

Milo is warned to leave the case alone. If he persists, he may find himself arrested, he may get orders from his own American Embassy, or he may even be killed by someone… or some thing. All of this may happen if he says out loud that a girl of no importance died because someone wanted her dead. But the question—and the shocking surprise—is who actually killed her?

A Lonely Walk was inspired by the true story of Wilma Montesi, whose death in 1953 led to a scandal that rocked Italy with revelations of corruption in high places. The real-life case remains unsolved death to this day. Not so Milo’s investigation of the girl who took a lonely walk—until Death came to keep her company.