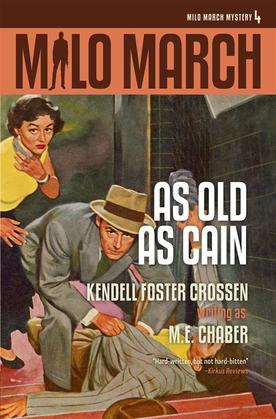 Insurance investigator Milo March is under pressure to solve a classic whodunit in a small town. Athens, Ohio, is a place full of historic monuments, many of them still walking the streets. But now the excitement of Hollywood has burst on the scene, with a studio shooting a biopic about a rugged pioneer who played a role in the founding of Athens County. Descendants of the story’s hero still live in Athens, and are the owners of valuable antiques, books, and other heirlooms passed down to them from the early 1800s. The studio has arranged to use these gems of Americana as props, insuring them with a million-dollar policy. With such a large sum at stake, the insurance company sends Milo to check on the security measures at the little museum where the items are housed under guard.

The job seems like a snap—until a bludgeoned body and a lot of smashed-open cases send everyone into a panic. Among the stolen items is a personal diary written by Hanna’s wife, which appears to be an object of intense interest, or even obsession. Milo can’t imagine why a diary from the early 1800s should be so dangerous as to lead to murder, but he’ll have to find out. Was it a matter of greed, professional ambition, or something bizarre like a delusional fixation on the long-dead pioneer woman who penned the diary? If being unpleasant or eccentric made someone a murderer, then there was full cast of characters to choose from, including a pedantic historian, a shiftless ex-cop, and a couple of snooping old biddies, not to mention a scheming scriptwriter, a genius director, and a man-eating blonde starlet.

Murder wasn’t supposed to happen in Athens, Ohio, and the cops want these crimes to be solved fast. The pressure is on Milo to identify the killer before he strikes again—and to recover the heirlooms before anyone cashes in the million-dollar policy.