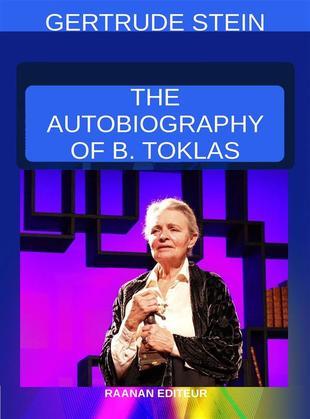 The Autobiography of Alice B. Toklas

by Gertrude Stein (Author)
Buy for €1.99 Excerpt
Fiction Biographical
warning_amber
One or more licenses for this book have been acquired by your organisation details

The Autobiography of Alice B. Toklas is a book by Gertrude Stein, written in October and November of 1932 and published in 1933. It employs the form of an autobiography authored by Alice B. Toklas, her life partner. In 1998, Modern Library ranked it as one of the 20 greatest English-language nonfiction books of the 20th century.

| Before I came to Paris

Alice B. Toklas, as narrator of the work, says she was born into an affluent family in San Francisco. Later she met Gertrude Stein's sister-in-law during the fires in the aftermath of the 1906 San Francisco earthquake, and decided to move to Paris in 1907.

Alice tells of Gertrude and her brother Leo Stein buying paintings by Paul Cézanne and Henri Matisse from Ambroise Vollard. They subsequently all become friends. She next discusses spending the summer with Gertrude in Fiesole, Italy, while Picasso goes to Spain. Back in France, Gertrude falls out with Guillaume Apollinaire. Later, Picasso has an argument with Matisse...|