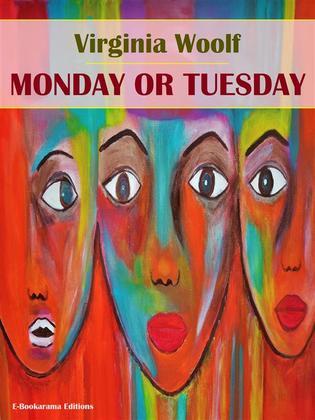 "Monday or Tuesday" is a collection of short stories written by Virginia Woolf in 1921, a collection which took its name from a story included in it.

One of the most distinguished critics and innovative authors of the twentieth century, Virginia Woolf published two novels before this collection appeared in 1921. However, it was these early stories that first earned her a reputation as a writer with "the liveliest imagination and most delicate style of her time."

Influenced by Joyce, Proust, and the theories of William James, Bergson, and Freud, she strove to write a new fiction that emphasized the continuous flow of consciousness, time's passage as both a series of sequential moments and a longer flow of years and centuries, and the essential indefinability of character.

Readers can discover these and other aspects of her influential style in the eight stories collected here, among them a delightful, feminist put-down of the male intellect in "A Society" and a brilliant and sensitive portrayal of nature in "Kew Gardens." Also included are "An Unwritten Novel," "The String Quartet," "A Haunted House," "Blue & Green," "The Mark on the Wall," and the title story.