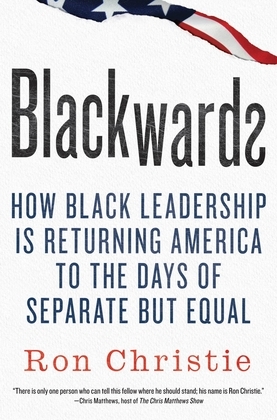 The euphoria surrounding Barack Obama's historic election had commentators naïvely trumpeting the beginning of a "post-racial America." In Blackwards, Ron Christie shows that not only is the opposite true, but black leadership today is effectively working against this goal by advancing an extremist agenda of separatism and special rights that threatens to point us backward to the days before Brown v. Board of Education.

The motto E pluribus unum ("Out of one, many") speaks to the idea of a melting pot in which Americans of all backgrounds come together to form a strong, unified nation. But in the race politics of today, Christie argues the American melting pot is threatened by what Pulitzer Prize-winning liberal historian Arthur Schlesinger Jr. warned was the "cult of ethnicity," in which social divisions are deepened rather than transcended.

Christie takes on such sacred cows as affirmative action and other race-based educational policies and campus programs that, in the words of former NAACP officer Michael Meyers, place "figurative black-only signs over certain doorways at America's colleges [while] only confirming and reinforcing pernicious racial stereotypes." Meanwhile, the author argues any open debate about such issues has been hijacked by such self-appointed spokesmen for black America as Al Sharpton, who co-opt the public narrative merely by being outspoken and charging racism against anyone who would speak against their political agendas and public grandstanding. Tellingly, it is within this context that then?presidential candidate Obama famously declared he could not disown Reverend Jeremiah Wright for his racist and anti-American sermons any more "than I can disown the black community."

Perhaps most important, Christie reveals how a separatist mind-set has led to a form of selective, skin-based jurisprudence in the federal government, including:

? Attempts by the Congressional Black Caucus to shield black members found to have committed ethics violations
? The Justice Department's sudden dropping of charges against New Black Panther Party members for voter intimidation during the 2008 presidential election
? A former trial attorney's admission that Americans "would be shocked to learn about the open and pervasive hostility within the Justice Department to bringing civil rights cases against non-white defendants on behalf of white victims"
As African Americans face skyrocketing rates of single-parent families and high-school dropouts, the author urges black American communities to shun the limits of the monolithic politics of victimhood and embrace an open debate of many voices en route to the goal not of a separate "Black America" but of constructive inclusion in the American melting pot.