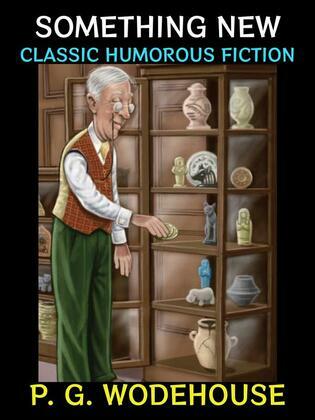 Something New by P. G. Wodehouse. Something New is a novel by P. G. Wodehouse. The novel introduces Lord Emsworth of Blandings Castle, whose home and family reappear in many of Wodehouse's later short stories and novels; in a new preface added to Something Fresh in 1969, Wodehouse dubbed this series of stories "the Blandings Castle Saga". Plot introduction Young neighbours and fellow-writers Ashe Marson and Joan Valentine, newly met and both in need of a change of direction, find themselves drawn down to Blandings, for various reasons attempting to retrieve a scarab belonging to an American millionaire, absent-mindedly purloined by Lord Emsworth. Once within the Castle's idyllic walls, despite impersonating servants, romance cannot help but blossom; meanwhile, Freddie Threepwood, engaged to the millionaire's daughter, is worried about some incriminating letters.