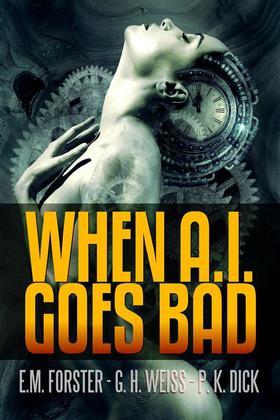 Three Classic Short Stories about our A. I. future - or lack of it.

All this discussion about artificial intelligence has to include speculative fiction about how it might turn out.

Like pandemics, you don't know how bad it really is until you've lived through it.

So here are three stories where some speculative fiction author has - at least in their own imagination.

Time (he said) is the great phenomenon, I know that, but to travel in it—ah, that seemed impossible to the point of absurdity. I had read H. G. Wells’ “The Time Machine,” as who has not, deeming it fantastic fiction. Wells’ story is fantastic fiction, of course, though scarcely as fantastic as what I experienced.

When I seated myself in the Professor’s time machine that night and pushed over the lever, I have no need to tell you that I was in a drunken and reckless mood. The room turned around me like a pin-wheel, dissolved into mist. I was conscious of the terrible vibration of the machine, of a deathly sickness at the pit of my stomach. Blackness followed the mist. Wells describes what the character in his story saw as he journeyed into the future, the procession of days and nights ever accelerating their motion, but I saw nothing like that, perhaps from the beginning the speed was too great. Terrified, bewildered, I yet retained enough presence of mind to depress the lever into neutral and so bring the machine to a halt. Moments passed while I lolled in my seat, blind, dazed; then my vision cleared—I could see. It was day. Sunlight fell around me. Everything was strange—and different. How can I make you see what I saw? The machine stood near one end of a great, open square that was surrounded by massive buildings. Those buildings! I had never seen their like before. And yet there was a similarity of line, of mathematical precision which linked them with the architecture of New York and Chicago. It was as if the building construction of to-day had been carried to an extreme length. As if the machine had carried it forward. I did not think that at the moment, but later….

The walls of the massive buildings were broken by yawning doorways. So this, I thought, is the future; it can be nothing less than that. I stepped out of the machine, holding on to it for support, still feeling terribly sick and giddy. Then I saw the cylinders! They came gliding from one of the openings in an upright fashion, and this was the singular thing about them, that their means of locomotion were not apparent to the eye. There were no wheels or treads. They appeared to skim the stone or concrete with which the square was paved, rather than touch it. Oddly repellent they were, and intimidating, and I loosened the automatic in its shoulder holster—the small one I always carry—and prepared for emergencies, though bullets were useless against the cylinders as I was to discover later.

The cylinders were smooth things about five feet tall, of a dulled metal hue, with here and there shining spots which constantly waxed and waned in color. They were machines—I thought of them as machines—and it was reasonable to suppose that behind them lurked a human intelligence. The people of the future, I thought, have invented devices unknown to us of the Twentieth Century; and it came over me how wonderful it was going to be to meet those superior people, talk to them, gaze upon the marvels with which they had surrounded themselves.

So I went to meet the cylinders...

- The Mentanicals by George Henry Weiss