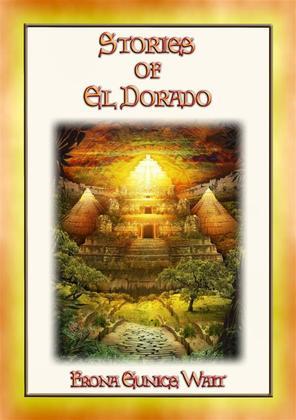 Herein are 28 myths and legends of El Dorado, the fabled City of Gold. They stretch from the Inca of Peru to the coming of the Columbus, to the Aztecs of Mexico and on north to the Native Americans of Southwest USA to the, then, “New” El Dorado – the 19th C. gold rushes of North America - the Forty-Niners strike at Sutter’s Mill, California and the Klondike rush of Alaska on the Yukon river.

The 28 myths in this volume, not only cover an expansive geographic area, they also cover over 1,600 years of elapsed time. They are accompanied by 28 exquisite drop capitals and 31 pen and ink drawings which help give an already fascinating subject more vitality. In this volume you will find golden myths and legends like:

Zamna, The Eye Of The Sun,

Bimini, The Fountain Of Youth,

Montezuma And The Paba,

The Mountain Of Gold,

The Land Of Gold,

The New El Dorado, and many more.

After an exhaustive study of the subject, Prof. A. F. Bandelier (August 6, 1840 – March 18, 1914 - the Hemenway Archaeological Expedition and later the American Museum of Natural History) whose research was used in this book, wrote in the early 1900’s “As to where these myths originated, or how old they are, I have nothing to suggest, since in presenting these simple variants, it is sufficient for my purpose to know that they exist. To me they lend a dignity to our country (the USA) by investing it with a misty past, replete with a mythology as rich and sublime as that of any of the races of antiquity. Not only will the study of them inspire patriotism and make us better acquainted with the inner lives of the Native Americans, but it will tend to create an interest in our sister republics which cannot fail to be of lasting practical benefit. We know much more of Europeans than we do of the peoples of this continent.”

10% of the profit from the sale of this book will be donated to charities.