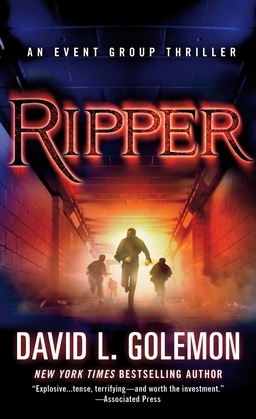 The real Jack the Ripper is loose, and this time he's brought friends to the darkness of the deep desert in the newest adrenaline rush from David Golemon, The New York Times bestselling author of Legacy.

In the tradition of works by James Rollins, Preston and Child and Matthew Reilly, Ripper is the latest in an action-packed series about the nation's most secret agency?The Event Group. In 1887, the British Empire contracted brilliant American professor Lawrence Ambrose to create a mutant gene to turn an ordinary person into an aggressive fighting machine. But all too quickly, Ambrose was found to be behind a streak of vicious murders, and in a cover-up of massive proportions, Queen Victoria ordered the project, and Ambrose, terminated. Thus the legend of Jack the Ripper was born.

The killings stopped as suddenly as they had begun?but not because Ambrose was caught. Instead, he escaped and returned home to America where he and his formula faded into history. But in 2012, a raid against a Mexican drug lord uncovers a small cache of antiquated notebooks containing long-buried instructions to create blind killers out of normal men. Enter the Event Group and Col. Jack Collins, who are desperate to stop one of their most feared enemies. When the formula is loosed in the underground halls and vaults of the Event Group complex itself, brother will battle brother, and for the first time in many men's brave lives they will understand the true meaning of fear.

The next heart-stopping chapter in the New York Times bestselling Event Group series, Ripper takes readers to new levels of suspense, where death could be hiding around any corner on this non-stop thrill ride.