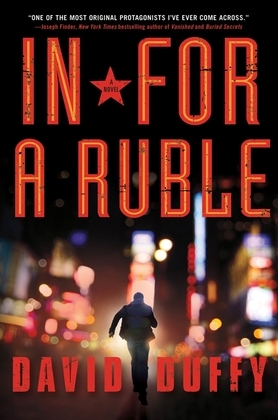 In for a Ruble

Turbo Vlost is back. He's depressed, drinking too much, and terrified that the love of his life is truly gone.

Hired to test the security of billionaire hedge fund manager Sebastian Leitz's computer system, Turbo finds himself peeling back the fetid layers of an immigrant family living the American dream while unable to escape mysterious and unspeakable demons.

Turbo isn't the only one interested in the Leitzs. The Belarus-based Baltic Enterprise Commission---a shadowy purveyor of online sleaze---has its claws in Leitz's brother-in-law. So, it appears, does Leitz's brother. And Leitz's son, a teenaged computer whiz, is running his own million-dollar schemes.

Thanks to his legwork and his partner's data-mining monster, Turbo can see all the cards. But to play the hand, he has to join the kind of game he recognizes from his childhood in the Gulag---one where the odds suddenly grow short and losers don't always come out alive.

David Duffy's In For a Ruble will enthrall fans of Martin Cruz Smith in this action-packed Turbo Vlost adventure.