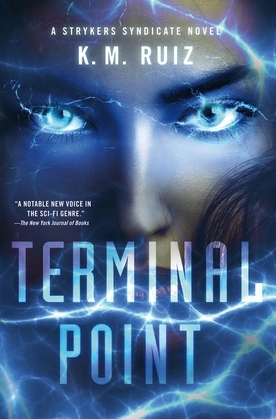 Fans of Charles Stross and Hannu Rajaniemi will lose themselves in this adventure as Threnody Corwin and her team of rogue Strykers contend with the aftermath of the events in Mind Storm and the unlocking of a new kind of psion power. They're on the run with Lucas Serca, who is closer than ever to destroying the World Court and his father's grip on the planet. Targeting the hidden cache of the planet's food supply meant to transform Mars into a paradise for the chosen few, Lucas triggers an escalating fight with the ruling government as worldwide chaos ensues. It's up to Threnody to save society before it destroys itself, but the cost is high and in the end, there is no such thing as compromise.

There is only survival.

In Threnody Corwin, K. M. Ruiz has created the coolest and most bad-ass sci-fi heroine since Signourney Weaver portrayed Ripley in the Alien films and Terminal Point takes her to the next level.