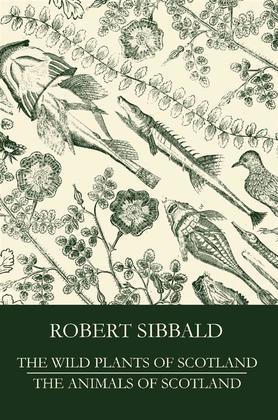 "There must be a divine kindness directed towards our homeland, because most of our animals have a use for human life. We also lack those wild and savage ones of other regions. Wolves were common once upon a time, and even bears are spoken of among the Scottish: but time extinguished the genera and they are extirpated from the island."

THE WILD PLANTS OF SCOTLAND AND THE ANIMALS OF SCOTLAND is a translation of two parts of Robert Sibbald’s (1684) Scotia Illustrata. The most ambitious of all the early modern Baconian natural histories, this text drew on data provided by over sixty contributors to describe the state of nature in Scotland in 1684.

This book describes Scotland as a paradise waiting to be harvested. Sibbald and his fellow contributors catalogue almost a thousand species of flora and fauna from the country, most of which were found to be useful to humans in some way. This is a rich source of information for conservationists, environmental and medical historians, conservationists and anyone interested in the natural heritage of Scotland.

Translated and edited by L Raye

"... We owe the description of this species to the hard work of Robert Sibbald, who found it first." - Carl Linnaeus

"… The learned Robert Sibbald, most honourable and most well-versed in natural history…" - John Ray

“In the Prodromus Robert Sibbald has shown himself worthy of what he enjoys in being the Kings Geographer and Physician.” - Philosophical Transactions of the Royal Society of London