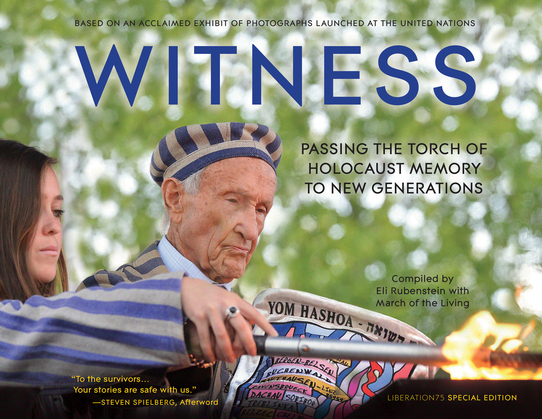 This updated edition of Witness, which includes a new Afterword with an address by Steven Spielberg, commemorates the 75th anniversary of the end of World War II and the liberation of Europe from the Nazis. For over 25 years, the March of the Living has organized visits for adults and students from all over the world to Poland, where millions of Jews were enslaved and murdered by Nazi Germany. The organization's goal is not only to remember and bear witness to the terrible events of the past, but also to look forward. Witness is a compilation of firsthand accounts from the survivors who have participated in March of the Living programs, together with responses from the people, young students in particular, of many faiths and cultures worldwide who have traveled with the group over the years. In the new edition each photograph of a survivor, rescuer, or WWII liberator is embedded with an invisible barcode that, via mobile phone, connects the reader to the video testimony of the individual pictured. 75 videos housed on the USC Shoah Foundation or March of the Living websites can be accessed this way. The new edition has also been enriched with compelling new liberation stories and additional content honoring those who rescued Jews during WWII. Along with the new Afterword, the book includes a Preface featuring Pope Francis and Pope John Paul II, and words from Barack Obama that remind us how important "witnesses" are to a true understanding of history and how we behave to one another today and in the future.