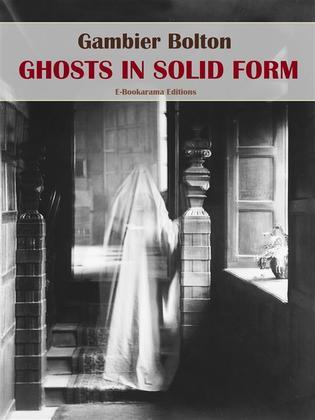 First published in 1914, "Ghosts in Solid Form" by Gambier Bolton is a collection of various mediumship experiments.

Excerpt from the Foreword:

As scientists in many parts of the world today are turning their serious attention to the question of the origin and the (possible) continuity of Life, I feel that the time has now arrived when a text-book on the subject of the phenomena, known to investigators as Materialisations, should be issued to the public, in order to assist inquirers, both scientists and laymen, in their endeavour to solve these vitally important matters; as, in my opinion, it is by no means improbable that in Materialisations we may find the clue which will eventually enable us to solve the question, asked by each cradle, "Whence?" and by each coffin, "Whither?"

This text-book contains, in plain and simple language the results of a series of experiments carried out during a period of seven years. With the exception of a few conducted by that master scientist Sir William Crookes, President of the Royal Society, London, and referred to in Chapter III. (to which mine were in the nature of a sequel), all were carried out in my presence; and the reports on these experiments have been collated from the official records kept by my three research societies in London.