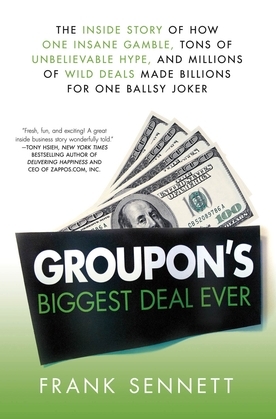 The inside story of the meteoric rise of Groupon from startup to $30 billion online giant and the audacious genius behind it, founder Andrew Mason

In late 2010, Groupon made an incredible gamble. Rather than take Google's $6 billion buyout offer, founder Andrew Mason turned the search giant down and decided to go it alone. The experts thought he was insane. Groupon was little more than two years old and staffed from top to bottom with twenty-somethings. The wild ride couldn't last, but Mason thought otherwise, and with knowledge of a possible IPO he liked his odds.

A discount service that offers a deal a day at local merchants in countless cities in more than forty-three countries, Groupon is the fastest-growing company in Internet history and is as committed to innovating a new model for commerce as it is to creating an office culture and editorial voice based on radical transparency and absurd humor.

Groupon's Biggest Deal Ever is the exclusive and unparalleled account of the incredible rise of discount giant Groupon and the compelling story of its offbeat founder Andrew Mason as he created a juggernaut of online commerce and ignited a consumer revolution.