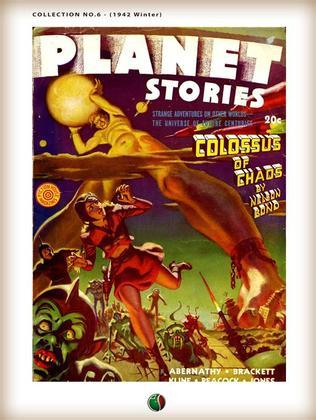 From the Void it came, bom of lifeless space. It drew life from Terra itself, that it might slay those who peopled the earth.

THREE OUTSTANDING NOVELETS OF OTHER WORLDS

The "Thing’ of Venus could not die—weapons were useless on the water-world.

The price of freedom was small. Myra and Steve had but to leave their sanity behind.

METEOR MEN OF MARS  (by Harry Cord and Otis A. Kline)

The doorway to Earth’s invaders was open—and the key was lost.

OUTPOST ON IO – (by Leigh Brackett)

Death was the only release from that Europan prison—but MacVickers had to escape and save his world from tyranny.

PERIL OF THE BLUE WORLD – (by Robert Abernathy)

“Beware the Blue World,” the Martians were warned. "It is peopled with ‘beings’ that weapons cannot fight!”

Willard laughed. He had seen the “ghost” of space—and lived.