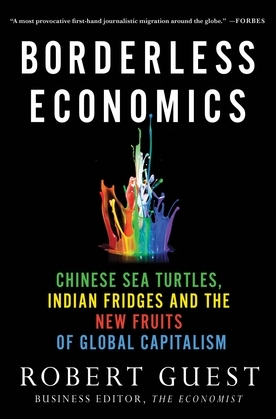 Acentury ago, migrants often crossed an ocean and never saw their homelands again. Today, they call - or Skype - home the moment their flight has landed, and that's just the beginning. Thanks to cheap travel and easy communication, immigrants everywhere stay in intimate contact with their native countries, creating powerful cross-border networks.

In Borderless Economics, Robert Guest, The Economist's Business Editor, travels through dozens of countries and 44 American states, observing how these networks create wealth, spread ideas and foster innovation. He shows how:
* Brainy Indians in America collaborate with brainy Indians in India to build $70 fridges and $300 houses
* Young Chinese study in the West and then return home (where they're known as "sea turtles"), infecting China with ideas that will eventually turn it democratic
* The so-called "brain drain" - the flow of educated migrants from poorcountries to rich ones - actually reduces global poverty
*America's unique ability to attract and absorb migrants lets it tap into the energy of all the world's diaspora networks. So despite its current woes, if the United States keeps its borders open, it will remain the world's most powerful nation indefinitely.
With on-the-ground reporting from Asia, Africa, Europe and even Idaho, this book examines how migration, for the all the disruption it causes, makes the world wealthier and happier.