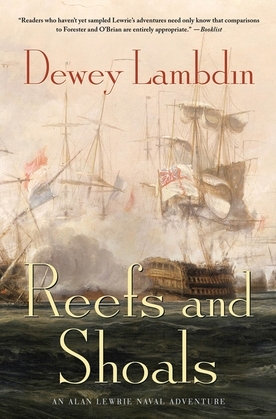 Pity poor Captain Alan Lewrie, Royal Navy! He's been wind-muzzled for weeks in Portsmouth, snugly tucked into a warm shore bed with lovely, and loving, Lydia Stangbourne, a Viscount's daughter, and beginning to enjoy indulging his idle streak, when Admiralty tears Lewrie away and order him to the Bahamas, into the teeth of ferocious winter storms. It's enough to make a rakehell such as he weep and kick furniture!
At least his new orders allow Lewrie to form a small squadron from what ships he can dredge up at Bermuda and New Providence and hoist his first broad pendant, even if it is the lesser version, and style himself a Commodore.
Lewrie is to scour the shores of Cuba and Spanish Florida, the Keys and the Florida Straits in search of French and Spanish privateers which have been taking British merchantmen at an appalling rate, and call upon neutral American seaports to determine if privateers are getting aid and comfort from that quarter. Lewrie is to be "Diplomatic." Diplomatic? Lewrie? Not bloody likely!
To solve the problem and find the answers will put Lewrie in touch with old friends, old foes, and more frustration than a dog has fleas. As usual, though, Captain Alan Lewrie will find his own unique way to fulfill his duties, and in the doing, find some fun in his own irrepressible manner!
Reefs and Shoals is the 18th installment in the Alan Lewrie series, from Dewey Lambdin, "The brilliantly stylish American master of salty-tongued British naval tales" (Kirkus Reviews).