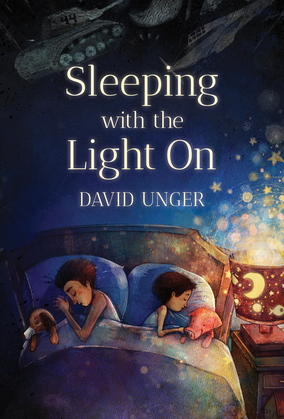 Sleeping with the Light On

Life in Guatemala is simple for young Davico and his older brother Felipe ... until soldiers invade, and the blackouts begin.

Davico lives with his family above La Casita — the Little House — in Guatemala City in the early 1950s. But it’s not just a little house. It’s also the family restaurant!

The restaurant provides plenty of distraction and adventure for Davico and his older brother, Felipe. The mean cook, Augusto, and the always-late waiter, Otto, love to play tricks on Davico. There’s a huge oven that Felipe knows how to light — if he can only reach the box of matches above the stove. And don’t forget the glass tank of live lobsters — including the king of them all, Genghis Khan, who stares at Davico with round unblinking eyes. Could Genghis Khan climb on the back of the other lobsters and get out of the tank, Davico wonders. Could he move faster on land than in the water?

Then one day, Davico hears shooting in the streets. There are blackouts every evening, and the family must sleep under the big wooden table in the dining room. People stop coming to the restaurant, and tanks and soldiers swarm the front of the National Palace, where a shoeshine boy warns the brothers that the gringos are coming.

But what does that mean, and who are the gringos?

Davico wants to be brave, but the shooting and tanks and airplanes flying overhead terrify him. He finds comfort in the special lamp that his father buys him to endure the blackouts. But it is not enough to console Davico when his parents announce that it’s time to leave for the United States of America, where no one speaks Spanish, and everything is different.

Explain how specific aspects of a text's illustrations contribute to what is conveyed by the words in a story (e.g., create mood, emphasize aspects of a character or setting)