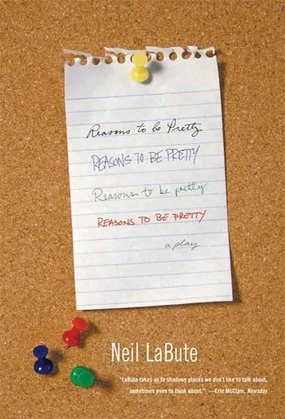 Reasons to Be Pretty

In Reasons to Be Pretty, Greg's tight-knit social circle is thrown into turmoil when his offhand remarks about a female coworker's pretty face and his own girlfriend Steph's lack thereof get back to Steph. But that's just the beginning. Greg's best buddy, Kent, and Kent's wife, Carly, also enter into the picture, and the emotional equation becomes exponentially more complicated. As their relationships crumble, the four friends are forced to confront a sea of deceit, infidelity, and betrayed trust in their journey to answer that oh-so-American question: How much is pretty worth?

Neil LaBute's bristling new comic drama puts the final ferocious cap on a trilogy of plays that began with The Shape of Things and Fat Pig. America's obsession with physical beauty is confronted headlong in this brutal and exhilarating work.