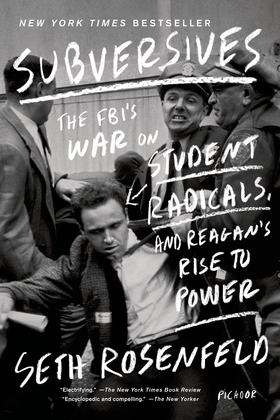 Subversives traces the FBI's secret involvement with three iconic figures at Berkeley during the 1960s: the ambitious neophyte politician Ronald Reagan, the fierce but fragile radical Mario Savio, and the liberal university president Clark Kerr. Through these converging narratives, the award-winning investigative reporter Seth Rosenfeld tells a dramatic and disturbing story of FBI surveillance, illegal break-ins, infiltration, planted news stories, poison-pen letters, and secret detention lists. He reveals how the FBI's covert operations?led by Reagan's friend J. Edgar Hoover?helped ignite an era of protest, undermine the Democrats, and benefit Reagan personally and politically. At the same time, he vividly evokes the life of Berkeley in the early sixties?and shows how the university community, a site of the forward-looking idealism of the period, became a battleground in an epic struggle between the government and free citizens.
The FBI spent more than $1 million trying to block the release of the secret files on which Subversives is based, but Rosenfeld compelled the bureau to release more than 250,000 pages, providing an extraordinary view of what the government was up to during a turning point in our nation's history.
Part history, part biography, and part police procedural, Subversives reads like a true-crime mystery as it provides a fresh look at the legacy of the sixties, sheds new light on one of America's most popular presidents, and tells a cautionary tale about the dangers of secrecy and unchecked power.