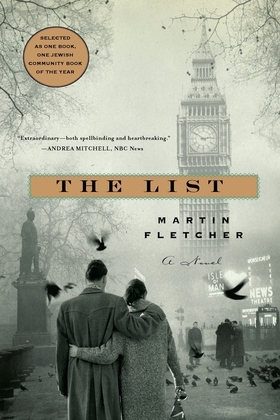 Martin Fletcher has captivated television audiences for thirty-five years as a foreign correspondent for NBC News. Now, Fletcher combines his own family's history with meticulous research in this gripping story of a young Jewish family struggling to stay afloat after World War II.

London, October 1945. Austrian refugees Georg and Edith await the birth of their first child. Yet how can they celebrate when almost every day brings news of another relative or friend murdered in the Holocaust? Their struggle to rebuild their lives is further threatened by growing anti-Semitism in London's streets; Englishmen want to take homes and jobs from Jewish refugees and give them to returning servicemen.

Edith's father is believed to have survived, and finding him rests on Georg's shoulders. Then Georg learns of a plot by Palestinian Jews to assassinate Britain's foreign minister. Georg must try to stop the murder, all the while navigating a city that wants to "eject the aliens."

In The List, Fletcher investigates an ignored and painful chapter in London's history. The novel is both a breathless thriller of postwar sabotage and a heartrending and historically accurate portrait of an almost forgotten era. In this sensitive, deeply touching, and impossible-to-forget story, Martin Fletcher explores the themes of hope, prejudice, loss and love that make up the lives of all refugees everywhere.