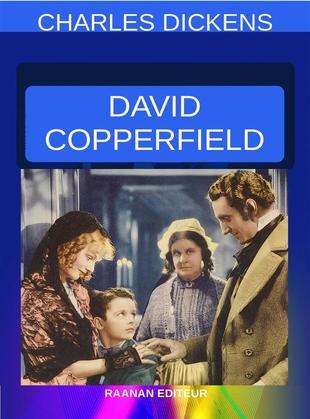 David Copperfield is the eighth novel by Charles Dickens. The novel's full title is The Personal History, Adventures, Experience and Observation of David Copperfield the Younger of Blunderstone Rookery (Which He Never Meant to Publish on Any Account). It was first published and as a book in 1850.

The novel features the character David Copperfield, and is written in the first person, as a description of his life until middle age, with his own adventures and the numerous friends and enemies he meets along his way. It is his journey of change and growth from infancy to maturity, as people enter and leave his life and he passes through the stages of his development.

It has been called his masterpiece, "the triumph of the art of Dickens", which marks a turning point in his work, the point of separation between the novels of youth and those of maturity. Though written in the first person, David Copperfield is considered to be more than an autobiography, going beyond this framework in the richness of its themes and the originality of its writing, which makes it a true autobiographical novel.

The England of David Copperfield.

The story follows the life of David Copperfield from childhood to maturity. David was born in Blunderstone, Suffolk, England, six months after the death of his father. David spends his early years in relative happiness with his loving, childish mother and their kindly housekeeper, Clara Peggotty. They call him Davy. When he is seven years old his mother marries Edward Murdstone. To get him out of the way, David is sent to lodge with Peggotty's family in Yarmouth. Her brother, fisherman Mr Peggotty, lives in a house built in an upturned boat on the beach, with his adopted relatives Emily and Ham, and an elderly widow, Mrs Gummidge. "Little Em'ly" is somewhat spoiled by her fond foster father, and David is in love with her. They call him Master Copperfield.

On his return, David is given good reason to dislike his stepfather, who believes exclusively in firmness, and has similar feelings for Murdstone's sister Jane, who moves into the house soon afterwards. Between them they tyrannize his poor mother, making her and David's lives miserable, and when, in consequence, David falls behind in his studies, Murdstone attempts to thrash him – partly to further pain his mother. David bites him and soon afterwards is sent away to Salem House, a boarding school, under a ruthless headmaster named Mr Creakle. There he befriends an older boy, James Steerforth, and Tommy Traddles. He develops an impassioned admiration for Steerforth, perceiving him as someone noble, who could do great things if he would, and one who pays attention to him.