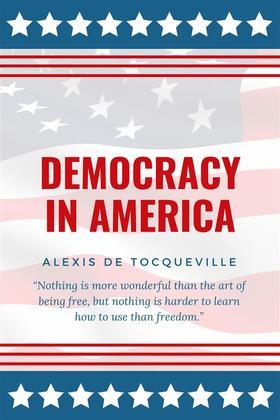 “Nothing is more wonderful than the art of being free, but nothing is harder to learn how to use than freedom.” —Alexis de Tocqueville

Alexis de Tocqueville’s four-volume Democracy in America is commonly said to be among the most comprehensive and insightful books ever written about the United States and the greatest works of nineteenth-century political writing.

With its trenchant observations on equality and individualism, Tocqueville’s work remains a valuable explanation of America to Europeans and of Americans to themselves. Tocqueville reminds us in Democracy in America that the core principle of democracy is the public commitment to equality among its citizens.

Tocqueville writes, “The nations of our day cannot prevent conditions of equality from spreading in their midst. But it depends upon themselves whether equality is to lead to servitude or freedom, knowledge or barbarism, prosperity or wretchedness.” Tocqueville's hope is that through the insights he has communicated in this work, humanity will be better able direct themselves toward freedom, knowledge and prosperity.

Democracy was the most successful political idea of the 20th century. Why has it run into trouble, and what can be done to revive it? Do we not have to thank Alexis de Tocqueville for warning us that they may well be the future of democracy?