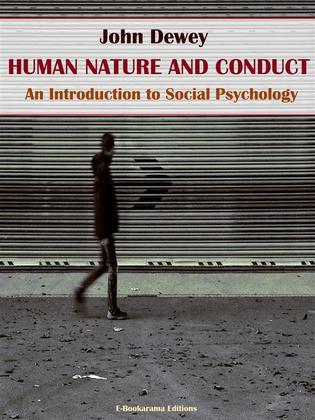 In "Human Nature and Conduct", John Dewey extends the principles of the his pragmatic philosophy into the realm of developmental and social psychology.

First published in 1922, the work was a notable departure from the deterministic theories of contemporaries, such as the physiological psychology of Wilhelm Wundt, the behaviourism of Ivan Pavlov, and Freud's emphasis on the unconscious. Refuting in particular the dualistic implications of the Pavlovian stimulus-response model of human behaviour and the arbitrariness by which those terms are assigned, he posits instead a holistic and humanistic paradigm in which a creative response to one's environment becomes the mark of a healthy individual.

Dewey brings the rigour of natural sciences to the quest for a better moral system. By studying habit, impulse, and intelligence, he arrives at a morality that is firmly rooted the context of the world, accounting for thinking humans with individual circumstances that do, indeed, make a difference when determining right and wrong.

Students of sociology, philosophy, and psychology will be interested to see moral judgement investigated as a scientific question by one of America's most influential philosophers.