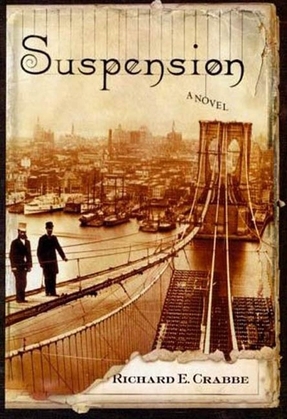 May 31, 1883, 3:55 p.m. Twenty thousand men, women, and children, their faces shining in the late afternoon sun, are strolling the Eighth Wonder of the World. The Brooklyn Bridge is open just a week, its promenade a magnet for the teeming masses of New York and Brooklyn. Anxious to escape the heat, overcrowding, and disease of the tenements, thousands stream onto the soaring span. To breathe free, high above the choking confines of the city is an experience like no other. An engineering marvel of transcending beauty, the bridge is simply breathtaking.

In precisely five minutes, it will fall.

Seven desperate men, former Confederate soldiers turned saboteurs, have labored for years to destroy the bridge. A symbol of hated Yankee supremacy, the bridge is the creation of Chief Engineer, Washington Roebling. They have stalked him down through the years, with hatred born of bitter loss. His actions at Gettysburg have earned him terrible retribution. It is his bridge, his life's work that will pay the price. The river will run red but for one man.

Sergeant Detective Tom Braddock is one step behind the conspirators. Working through a series of murderous dead-ends, Braddock has dogged the seven men from the cables of the bridge to the shadowy alleys of the Lower East Side and the back streets of Richmond, Virginia. With the help of an eager roundsman, new to the force, he has slowly drawn closer to the unthinkable truth, a truth that none can accept.

Braddock's adversaries are many. Enemies within the police department seek to draw him deeper into a cesspool of corruption from which there seems no escape. To lose that battle is to surrender all hope, for his hands are far from clean already. Braddock must prevail against the enemy within if the bridge is to be saved. It is the love of Mary, the captivating Madame of a mid-town brothel that helps him find the way. Their fates are bound together, as surely as they are bound to the bridge. But it is Mike, a boy of the tenements, who literally holds the key to all their futures.

Suspension is a riveting historical thriller filled with fascinating details of the construction of the Brooklyn Bridge.