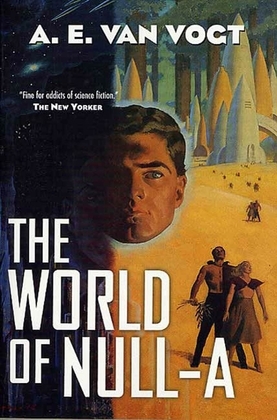 The World of Null-A

Grandmaster A. E. van Vogt was one of the giants of the 1940s, the Golden Age of classic SF. Of his masterpieces, The World of Null-A is his most famous and most influential. It was the first major trade SF hardcover ever, in 1949, and has been in print in various editions ever since. The entire careers of Philip K. Dick, Keith Laumer, Alfred Bester, Charles Harness, and Philip Jose Farmer were created or influenced by The World of Null-A, and so it is required reading for anyone who wishes to know the canon of SF classics.

It is the year 2650 and Earth has become a world of non-Aristotelianism, or Null-A. This is the story of Gilbert Gosseyn, who lives in that future world where the Games Machine, made up of twenty-five thousand electronic brains, sets the course of people's lives. Gosseyn isn't even sure of his own identity, but realizes he has some remarkable abilities and sets out to use them to discover who has made him a pawn in an interstellar plot.