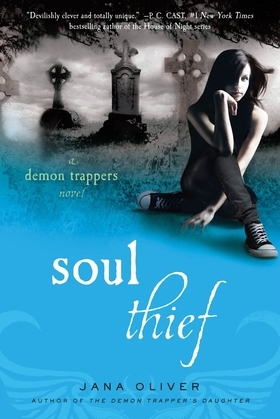 Riley Blackthorne is beginning to learn that there are worse things than death by demon. And love is just one of them?

Seventeen-year-old Riley has about had it up to here. After the devastating battle at the Tabernacle, trappers are dead and injured, her boyfriend Simon is gravely injured, and now her beloved late father's been illegally poached from his grave by a very powerful necromancer. As if that's not enough, there's Ori, one sizzling hot freelance demon hunter who's made himself Riley's unofficial body guard, and Beck, a super over-protective "friend" who acts more like a grouchy granddad. With all the hassles, Riley's almost ready to leave Atlanta altogether.

But as Atlanta's demon count increases, the Vatican finally sends its own Demon Hunters to take care of the city's "little" problem, and pandemonium breaks loose. Only Riley knows that she might be the center of Hell's attention: an extremely powerful Grade 5 demon is stalking her, and her luck can't last forever?
Soul Thief is Book Two in Jana Oliver's bestselling young adult series, Demon Trappers.