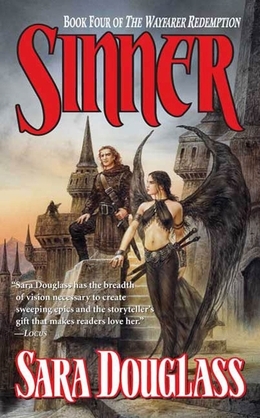 Sinner is the fourth book in Sara Douglass's The Wayfarer Redemption series, however it starts a brand new story arc and is the perfect place for new readers to enter this epic fantasy series.

The land Tencendor has been united for more than forty years. The Starman Axis defeated the dreaded monster Gorgrael and by fulfilling his destiny he has brought peace finally to the three races of this land: the Icarii bird people, the Avar tree people, and the humans who for generations controlled (and oppressed) the other two races. Attaining god-like powers, Axis chose to retire to the ethereal sphere in the heavens with his beautiful consort Azhure and ceded his authority to his son Caelum SunSoar. As Supreme Ruler of Tencendor, Caelum holds the reins of power carefully and the thousands of years of ill-will between the three races seems to be at an end. All seems golden for this land. Or so it might seem.

But the path of the son is not necessarily that of the father. Caelum is untried and has known nothing but peace during his lifetime. And while the three races appear at peace, there are undercurrents of jealousy and bitter memories just buried beneath the surface.

So when strange powers threaten to come through the Star Gate (a source of power that gives those with magic their near immortality) bent on the destruction of all he holds dear, Caelum will have to find the strength to fight this threat.

Complicating this situation is the almost impossible death of his Icarri sister...and the culprit appears to be none other then his hated brother Drago, who as a baby had been in league with Gorgrael and had sufficient power to try to kill Caelum. As punishment Drago was made mortal (unlike his near invulnerable siblings). As Caelum struggles to hold all he holds dear safe, he is left with this quandary:

Is Drago as powerless as he seems? Is his hate for his fate enough to have him murder?

And is he in league with the demons that hover ever nearer?