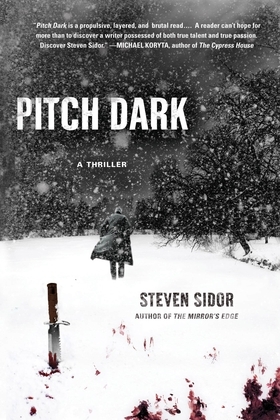 "Pitch Dark is a propulsive, layered, and brutal read. . . . A reader can't hope for more than to discover a writer possessed of both true talent and true passion. Discover Steven Sidor."
---Michael Koryta, author of The Cypress House

It's Christmas Eve, and Vera Coffey is on the run. She doesn't know the men who are after her. She has never seen them before, but she has seen the horrors they visit on people who don't give them what they want. Vera has something they want badly. She'd give it up if it weren't the only thing keeping her alive.

The Larkins have known the toll violence takes on a family ever since they were trapped in a madman's shooting rampage. They've been coping with the trauma for nearly twenty years. Now, on a cold and lonely winter morning, Vera collapses at their roadside motel. And she's brought something with her. Together they'll have to make one last stand against an evil that has followed them further than anyone could've imagined.

With a thriller so fast-paced that it's impossible to let go and an ominous sense that everything is destined to go wrong, Pitch Dark is an intense read from a master of suspense.