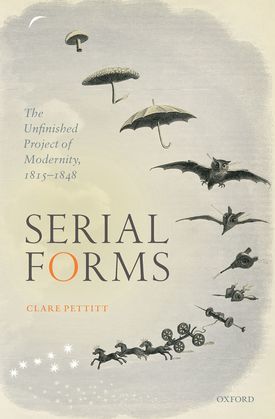 Serial Forms: The Unfinished Project of Modernity, 1815-1848 proposes an entirely new way of reading the transition into the modern. It is the first book in a series of three which will take the reader up to the end of the First World War, moving from a focus on London to a global perspective. Serial Forms sets out the theoretical and historical basis for all three volumes. It suggests that, as a serial news culture and a stadial historicism developed
together between 1815 and 1848, seriality became the dominant form of the nineteenth century. Through serial newsprint, illustrations, performances, and shows, the past and the contemporary moment enter into public visibility together. Serial Forms argues that it is through seriality that the social is represented
as increasingly politically urgent. The insistent rhythm of the serial reorganizes time, recalibrates and rescales the social, and will prepare the way for the 1848 revolutions which are the subject of the next book. By placing their work back into the messy print and performance culture from which it originally appeared, Serial Forms is able to produce new and exciting readings of familiar authors such as Scott, Byron, Dickens, and Gaskell. Rather than offering a rarefied intellectual
history or chopping up the period into 'Romantic' and 'Victorian', Clare Pettitt tracks the development of communications technologies and their impact on the ways in which time, history and virtuality are imagined.