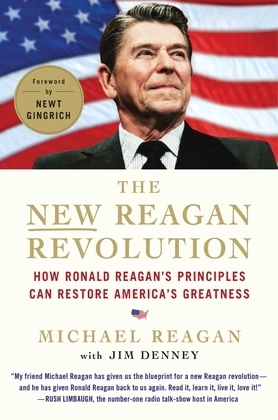 "There are cynics who say that a party platform is something that no one bothers to read and it doesn't very often amount to much. Whether it is different this time than it has ever been before, I believe the Republican Party has a platform that is a banner of bold, unmistakable colors, with no pastel shades." ?Ronald Reagan, 1976 Republican National Convention

When Ronald Reagan was called to the podium by President Ford during the 1976 Republican National Convention, he had no prepared remarks. But the unrehearsed speech he gave that night is still regarded as one of the most moving speeches of his political career. The reason he was able to give such a powerful speech on a moment's notice was that he was proclaiming the core principles of his heart and soul, which he had been teaching and preaching for years.

The New Reagan Revolution reveals new insights into the life, thoughts, and actions of the man who changed the world during the 1980s. The challenges and threats we face today are eerily similar to the conditions in the world before the beginning of the Reagan era. The good news is that we already know what works. Ronald Reagan has given us the blueprint. This book is not merely a diagnosis of our nation's ills, but a prescription to heal our nation, rooted in the words and principles of Ronald Reagan. In these pages, you'll find a plan for returning America to its former greatness, soundness, and prosperity. It's the plan Ronald Reagan developed over years of study, observation, and reflection. It's a plan he announced to the nation, straight from his heart, one summer evening during America's 200th year. It's the plan he put into action during his eight years in office as the most effective president of the 20th century, and it is the plan we can use today to help return America to its former greatness, soundness, and prosperity.