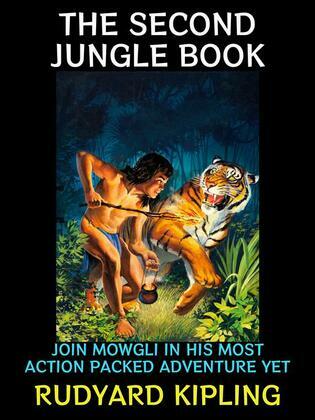 The Second Jungle Book by Rudyard Kipling. The tales in The Second Jungle Book includes five further stories about Mowgli) are fables, using animals in an anthropomorphic manner to give moral lessons. "How Fear Came": This story takes place before Mowgli fights Shere Khan. During a drought, Mowgli and the animals gather at a shrunken river for a 'water truce', during which Hathi the elephant tells the story of how the first tiger got his stripes. "The Miracle of Purun Bhagat": An influential Indian politician abandons his worldly goods to become an ascetic holy man. Later he must save a village from a landslide with the help of the local animals whom he has befriended. "Letting in the Jungle": Mowgli has been driven out of the human village for witchcraft, and the superstitious villagers are preparing to kill his adopted parents Messua and her (unnamed) husband. Mowgli rescues them and then prepares to take revenge. "The Undertakers": A mugger crocodile, a jackal and an adjutant stork (erroneously referred to as a crane in the story), three of the most unpleasant characters on the river, spend an afternoon bickering with each other until some Englishmen arrive to settle some unfinished business with the crocodile. "The King's Ankus": Mowgli discovers a jewelled object beneath the Cold Lairs which he later discards carelessly, not realising that men will kill each other to possess it.