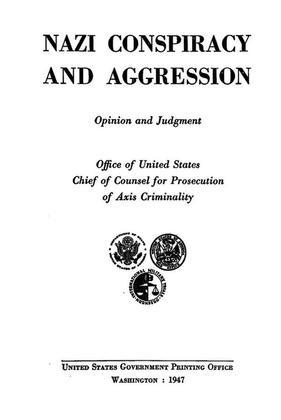 A Collection of Documentary Evidence and Guide Materials Prepared by the American and British Prosecuting Staffs for presentation before the International Military Tribunal at Nürnberg, Germany in the court case against all surviving most senior members of Nazi High Command, who planned, carried out, or otherwise participated in the Holocaust and other war crimes. It was described as "the greatest trial in history" by Sir Norman Birkett, one of the British judges present throughout. Held between 20 November 1945 and 1 October 1946, the Tribunal was given the task of trying 24 of the most important political and military leaders of the Third Reich.