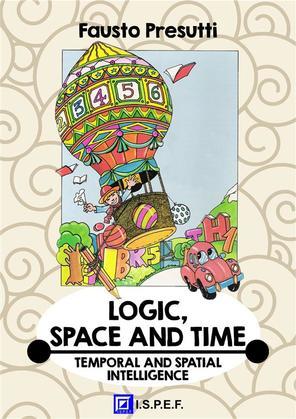 LOGIC, SPACE AND TIME is a teaching tool full of game exercises, that allows you to identify the psycho-cognitive skills of children and to develop their mental universe and their psychic world by:

- The structure and evolution of logical, intellectual and creative processes;

- The conceptualization of the incentive elements, spaces and environments represented

The game-exercises of LOGIC, SPACE AND TIME develop the following concepts and topics:

LOGIC, SPACE AND TIME is used simply by playing and learning with the children. The cheerful drawings and the stimulating graphical games easily become characters of the fantasy world created by children, building events and stories that allow them to spontaneously discover the rules of the game-exercises proposed.

Each exercise shows an activity-game full of characters and events to which underlies a logic that attracts the curiosity of the child, to take him, year after year, idea after idea, the use of a series of reasoning needed to understand and interpret the world around him.

It is important that the teacher and/or parent presents the educational proposals, leaving the child time and the ability to understand and recreate the logical concept that acquires; This allows:

- The child to self evaluate and decide the time and manner of their own learning, becoming a participant and protagonist of his education;

- Teacher / parent to carefully follow the reasoning of the child without duties or evaluate, but having the freedom to relate in a calm and constructive.