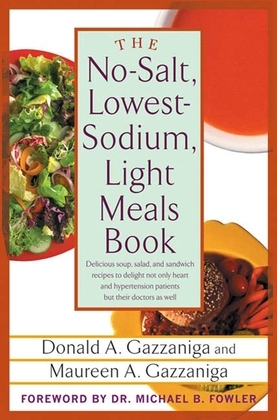 Perhaps heartbreaking is the wrong word for a very happy event, one that brings tears to your eyes because you know what the alternative would have been. But however you describe it, the letters that Don Gazzaniga finds on his web site ever since his first cookbook was published easily bring tears to the reader's eyes.

"The doctor told him that the very low-sodium diet is the main thing responsible for this success and I couldn't wait to share it with you."

"When I said that your book saved [my husband's] life, I meant it."

That first cookbook was a surprise to medical professionals and their patients alike. Doctors have always believed that no one could ever get below 1500 milligrams of sodium a daily diet.
"Keep it at that level," Don's doctor told the sixty-three-year-old Gazzaniga in 1997. He had diagnosed his patient's problem as congestive heart failure and was about to sign him up for the only solution believed possible, a heart transplant.

To Don, this was a challenge. After a lot of research, the help of nutritionist daughter, Jeannie, familiarity with the cuisines of many different countries, and hours in the kitchen, Don came up with a large selection of recipes and a twenty-eight-day menu that never went above five hundred milligrams of sodium a day! Yep! That's five hundred. And the food was delicious.
The recipes in that first diet were gathered in a general cookbook that told readers just about everything they needed to know: where to find the right ingredients, how to make tasty substitutions that did not raise the sodium level, and more, with the sodium count given for each ingredient and each recipe.

That was The No-Salt, Lowest-Sodium Cookbook. Don decided to embellish the general work with some specialties and, with his wife, Maureen, created The No-Salt, Lowest-Sodium Baking Book. If anyone thinks that you can't make delicious bread and pies and cookies and other baked goodies with very little or no sodium, try a few of Don's recipes.
i0
But suppose you want to celebrate your grandson's third birthday, or your doctor's latest green light, with a party and need delicious tidbits for the guests. Here they are in their new book. Sometimes you feel like a light lunch---a salad, a sandwich, a bowl of soup. Here they are. There are sections explaining where to buy special flavorings and the like, how to substitute low-sodium or sodium-free ingredients, and a foreword by Dr. Michael Fowler, director of the Stanford Heart Transplant Program and medical director of the Stanford Cardiomyopathy Center.