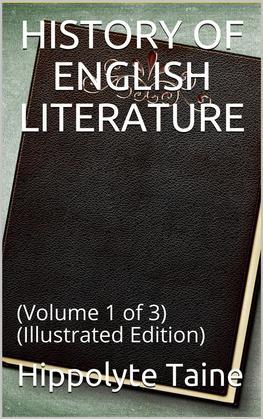 History of English Literature Volume 1 (of 3)

by Hippolyte Taine (Author)
Buy for €4.99 Excerpt
Nonfiction Literary collections English, Irish, Scottish, Welsh
warning_amber
One or more licenses for this book have been acquired by your organisation details

The publication of M. Taine's "History of English Literature," in 1864, and its translation into English, in 1872, mark an epoch in educational history, especially in that of America. Prior to the appearance of this work, the total knowledge of British writers gained in the school and college life of the ordinary American youth was generally derived in the form of blind memorization from one text-book. This book was a combination of minute biographical detail with the generalities and abstractions of criticism. The student, and the general reader as well, did not really study the great writers at all; he simply memorized what someone had written about them; and he tried, generally in vain, to comprehend the real concrete significance of such critical terms as "bald, nervous, sonorous," etc. But with the distribution of M. Taine's great work came the beginning of better things. It was the first step in an evolution by no means yet completed—a movement paralleled in the development of methods of scientific study during the last four decades. Forty years ago the pupil did not study oxygen, electricity, or cellulose; he simply memorized what someone had written about these elements. He never touched and rarely saw the things themselves, and he counted himself fortunate if his instructor had the energy and the facilities to perform before the wondering class a few stock experiments. But all this has been changed. It is now universally recognized that the only sound method of studying any science is the laboratory method; that is, the study of the thing itself in all its manifestations. In methods of studying literature the progress towards a true scientific, that is, a laboratory method, has been much slower, but it seems almost equally sure. We are just now in the intermediate stage, where we study "editions with notes." Our educators, as a rule, have yet to learn that to memorize biographical data and the mere generalities and negations of criticism, or to trace out obscure allusions and doubtful meanings, is not to study a writer in any broad or fruitful sense. But the movement towards a true scientific method is already well begun; and, as we have said, to M. Taine belongs the honor of taking the initial step.