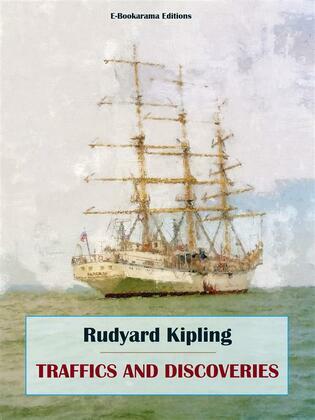 Rudyard Kipling wrote some 250 short stories. He published them in all sorts of contemporary newspapers and journals throughout his long career, and it was his practice to bring them together into collections published every few years. These collections form milestones through his oeuvre.

It was also his habit to prefix or follow each story with a short poem commenting directly or obliquely on the narratives they decorate – a habit he picked up, apparently, from a favourite author, Ralph Waldo Emerson and took to new heights of complex interaction and subtle commentary.

This essential 1904 collection takes its name from "The Principal Navigations, Voyages, Traffiques and Discoveries of the English Nation" by Richard Hakluyt, a compendium of exciting Elizabethan sailing expeditions. "Traffics and Discoveries" includes the following amazing short stories:

- The Bonds of Discipline

- "Their Lawful Occasions" (as Part I and Part II)

- The Comprehension of Private Copper

- Below the Mill Dam