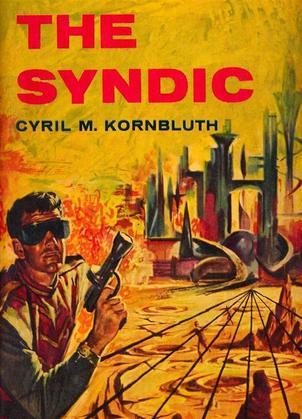 There have been a thousand tales of future utopias and dystopias and civilizations. They have been ruled by dictatorships and democracies, every form of government from extreme right to absolute left. But unique among these is the lawless, semi-anarchistic society ruled by THE SYNDIC.

A future America is divided between rival criminal gangs the Syndic on the East Coast and the Mob in the West, who have driven the federal government into exile. The protagonist, Charles Orsino, is a member of the Syndic. After a failed assassination attempt he is invited to a meeting of the leaders of the Syndic, who suspect that the exiled government were responsible. To discover the truth, Charles volunteers to go undercover to infiltrate both the government and the Mob.