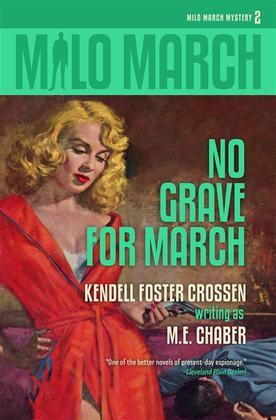 In this action-packed Cold War spy adventure, Milo March—private detective and former OSS officer during World War II—is recruited by Army intelligence to carry out a dangerous mission behind the Iron Curtain. An important British diplomat has defected to East Germany, carrying with him secrets about British and American codes. He can also help the Communists gain access to a physicist working in the British Sector on a top-secret project that involves tampering with energy fields affecting the human brain?a bizarre process that could disastrously alter the nature of warfare. “Operation Berlin” demands that Milo kidnap the diplomat before the Russians make him talk.

Disguised as an American Communist delegate to an international Peace Festival in Berlin, Milo dashes into the Soviet Zone just as the news leaks that an American agent is coming to the event. Surrounded by suspicious comrades, he is congratulated on his mastery of Lenin quotes one moment, while the next he is subjected to arrest and a torturous interrogation. Even when he scores a point, he never knows whether he is fooling them or they are fooling him.

While treading this unbearable tightrope of tension, he is distracted by two beautiful women: the sexually aggressive blonde Frieda and the soft-eyed, black-haired Greta, who has some secrets of her own. Either or both of these feminine comrades could be on the verge of betraying him. Although the efficient and fearless Milo always insists on working alone, help comes from an unexpected quarter in the nick of time.