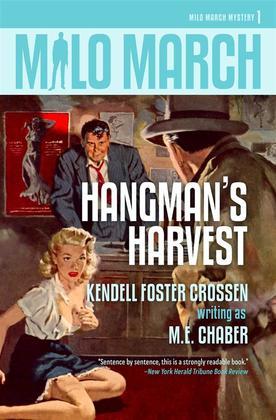 Milo March, a tough private eye from Denver, is sent to Aragon City (which could be Hollywood) to help the City Betterment Committee wipe out the gangsters and hoodlums controlling brothels, bookies, gamblers, shady nightclubs, and the dope traffic. He just has to uncover “Mr. X,” the mystery man who’s been raking in a tidy little income by providing protection to the Syndicate. But can Milo accomplish that without stumbling over something even more dangerous—like who pays Mr. X, and why? Milo is well equipped for the job. He has plenty of gall, good looks, an unlimited expense account, a fishtail Cadillac, and ample experience with lawbreakers—and beautiful, willing women, of whom there are several, but only one who is the girl next door. As March starts his snooping, he is surprised to discover a sexy, naked blonde in his hotel room. And there are other, more painful things complicating his life—things like beatings and fistfights and gun battles, and a blow he never saw coming.

“The established pattern of California coast crime—political graft, dope, and prostitution—with a fall guy introduced to clean it up. Milo March, hired by the Civic Betterment Committee, fouls up with the brains and muscle men when he spies on his assignment before he is due, latches onto cultured hoods and tough racket boys—and pays off from syndicate roughing up to cards down.” —Kirkus Reviews

“It was obvious that sooner or later there’d be a capable challenger of Mickey Spillane in the concoction of the muscular and seductive mixture that makes Spillane’s best-selling books. A challenger has appeared in M.E. Chaber.” ?Los Angeles Examiner