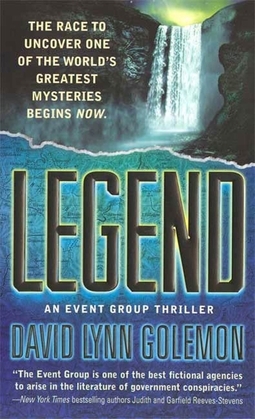 Go down a river of no return, toward a fateful meeting with an animal that predates mankind's existence by ninety million years---after a treasure that has captured man's desires for centuries. This is what Legends are made of.

The year 1533: Sent by Francisco Pizarro, Captain Hernando Padilla and his small Spanish expedition found the legend that men had only dared to whisper. In a lost valley deep in Brazil, he discovered what had driven men of greatness into sheer madness: El Dorado, the largest gold deposit in the world, hidden away from the march of time, preserved as the pristine Eden of wondrous sights and forgotten people.

But what he found wasn't just gold.

Instead, Padilla and his crew awakened a devil hidden in the lost valley, a beast of the Amazon who rises from the mother of all waters to viciously kill any who threaten the secret of the long-vanished Incas. But one soldier survives the bloody savagery and, before dying, shares his story with a lone priest in Peru. A secret the Vatican quickly buried away.

The Present: Professor Helen Zachary is searching for a hidden legend, buried deep within the Amazon Basin---a great beast who has survived there since the dawn of time, a being ready to plunge modern science into a world of darkness. And into this darkness, Professor Zachary and her team vanish.

Now a letter from a colleague of Zachary's sends the Event Group, led by Major Jack Collins, chasing down the professor's lost expedition and into the legendary darkness of the Amazon. Dedicated to discovering the truth behind the myths and legends propagated throughout world history, the Event Group---an agency within the U.S. government that officially doesn't exist---ensures that mistakes from the past are never repeated. They are a dedicated collection of the nation's most brilliant men and women of science, philosophy and the military.

Using cutting-edge technology exclusively designed for the Event Group by the U.S. military, they travel from Brazil to the Little Bighorn, from Columbia to the hallowed grounds of Arlington National Cemetery. As they do, the Event Group faces mounting opposition from several different adversaries bent on either discovering the whereabouts of El Dorado . . . or trying to bury the legend forever.