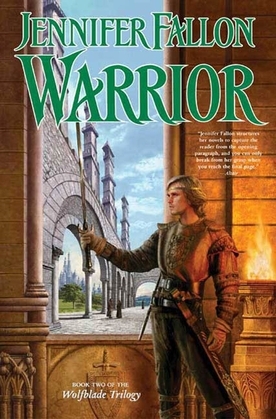 Warrior is the second fantasy novel in The Wolfblade Trilogy, set before the events of the Demon Child Trilogy, and follows the adventures of Damin Wolfblade's mother, Her Highness Marla Wolfblade of Hythria.

It is eight years since Marla Wolfblade buried her second husband. In that time, she has become the power behind Hythria's throne -- as much from a desire to control her own destiny in any way she can, as to protect her son, young Damin.

But while Marla plays the games of politics and diplomacy, the High Arrion of the Sorcerers' Collective is plotting to destroy her -- and the entire Wolfblade line.

And while Marla's power and fortune are great, they may yet not be enough to protect herself and her family from the High Arrion's wrath -- and her only ally and confidant, Elezaar the Fool, is toying with the idea of betrayal.

For he has discovered that the infamous Rules of Gaining and Wielding Power are not so useful when his own family is involved...