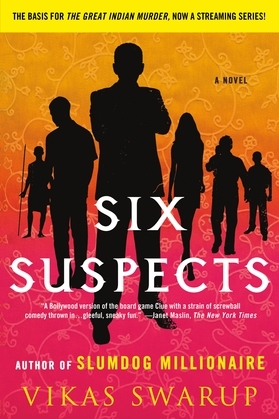 There's a caste system--even in murder

From the author of the international bestseller Slumdog Millionaire comes a richly-textured tale of murder, corruption, and opportunity.

Seven years ago, Vivek "Vicky" Rai, the playboy son of the Home Minister of Uttar Pradesh, murdered bartender Ruby Gill at a trendy restaurant in New Delhi, simply because she refused to serve him a drink.

Now Vicky Rai has been killed at the party he was throwing to celebrate his acquittal. The police recover six guests with guns in their possession: a corrupt bureaucrat who claims to have become Mahatma Gandhi overnight; an American tourist infatuated with an Indian actress; a stone-age tribesman on a quest to recover a sacred stone; a Bollywood sex-symbol with a guilty secret; a mobile-phone thief who dreams big; and an ambitious politician prepared to stoop low.

Swarup unravels the lives and motives of the six suspects, offering both a riveting page-turner and an insightful peek into the heart of contemporary India. Audaciously and astutely plotted, with a panoramic imaginative sweep, Six Suspects is the work of a master storyteller.