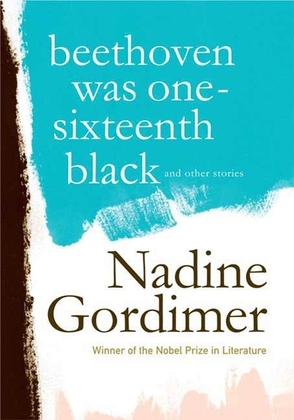 "You're not responsible for your ancestry, are you . . . But if that's so, why have marched under banned slogans, got yourself beaten up by the police, arrested a couple of times; plastered walls with subversive posters . . . The past is valid only in relation to whether the present recognizes it."

In this collection of new stories, Beethoven Was One-Sixteenth Black, Nadine Gordimer crosses the frontiers of politics, memory, sexuality, and love with the fearless insight that is the hallmark of her writing. In the title story a middle-aged academic who had been an anti-apartheid activist embarks on an unadmitted pursuit of the possibilities for his own racial identity in his great-grandfather's fortune-hunting interlude of living rough on diamond diggings in South Africa, his young wife far away in London. "Dreaming of the Dead" conjures up a lunch in a New York Chinese restaurant where Susan Sontag and Edward Said return in surprising new avatars as guests in the dream of a loving friend. The historian in "History" is a parrot who confronts people with the scandalizing voice reproduction of quarrels and clandestine love-talk on which it has eavesdropped."Alternative Endings" considers the way writers make arbitrary choices in how to end stories?and offers three, each relating the same situation, but with a different resolution, arrived at by the three senses: sight, sound, and smell.