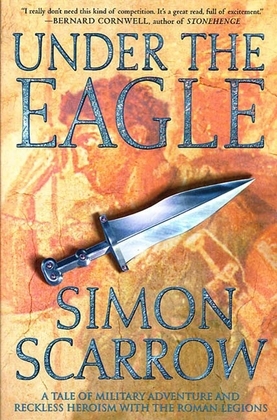 In this first book of a new historical fiction series, a crack Roman legion invades Britain in this brazen tale of military adventure, political intrigue and heroism

It is the year 42 AD, and Centurion Macro, battle-scarred and fearless, is in the heart of Germany with the Second Legion, the toughest in the Roman army. Cato, a new recruit and the newly appointed second-in-command to Macro, will have more to prove than most. In a bloody skirmish with local tribes, Cato gets his first chance to prove that he's more than a callow, privileged youth. As their next campaign takes them to a land of unparalleled barbarity - Britain - a special mission unfolds, thrusting Cato and Macro headlong into a conspiracy that threatens to topple the Emperor himself.

Filled with the kind of historical details that brings the adventure to life, Simon Scarrow's Under the Eagle is destined to become a military fiction classic.